Here are some tips and advice gleaned from the internet regarding Minecraft.
(They apply to the paid version (Beta) and not to the free version. Note that these tips are for single-player mode. They do not necessarily apply to multiplayer mode because the latter does not behave exactly like the model. solo.)

It is possible to grow trees underground without daylight, as long as there is soil, enough space, and they are well lit by torches. Always start by putting a torch on either side of the newly planted shoot Lava and water can be scooped into a bucket and poured back anywhere you like to create a new lava source or torrent. Convenient to make a fountain Never dig directly into the block directly below or above you. In the first case, you risk falling into a cave, in the second you get lava on your head, or die of suffocation under tons of gravel.

If you are in a cave and part of the ceiling is sand, do not shovel in the slightest, it will collapse the entire ceiling and you will suffocate in the sand The day lasts 10 minutes, also at night If you don’t want to wait until the end of the night, make a bed: you can sleep in it and wake up immediately at dawn. A bed is built with 3 blocks of wool (type sheep) on top of 3 blocks of wooden planks. The sun and the moon always move in the same direction: you can use them to find your bearings Monsters appear in poorly lit places: remember to light them well with torches. The deeper you are underground, the lighter tolerant the monsters are, and therefore the closer the torches must be.

Lava is an advantageous replacement for wood or charcoal in the oven: it heats up much longer Avoid creating tools, weapons, or armor in gold: they are much less solid than diamond, iron … or even stone Never build your wooden house: In the event of a fire (eg a zombie burning in the sun) it can set your entire house on fire and you will lose your possessions (including chests). Always build in stone (cobblestone By putting two blocks of water on top of each other, you can fall into it from any height without hurting yourself. Convenient for getting off a very large tower under construction, for example, or for making a quick entry into a very deep mine By keeping the “Sneak” key pressed (see keyboard config), you move slowly (at half the normal speed) and without making noise. But it also prevents you from falling off the edge of a boulder. It is very convenient when building a bridge.

Be careful to use the right tools: pickax on rock, shovel on earth … a tool used improperly wears out much faster Do not try to collect gold or any other precious metal with a rock or wooden pickaxe: once broken, the block will not give you anything. To do this, you need to break it with at least an iron pickaxe.

Some blocks won’t reject anything if you don’t use the correct tool.

Remember to keep your most precious possessions in a safe in your house: this will prevent you from losing them on an expedition or in a mine If you have trouble surviving the monsters, consider switching the difficulty temporarily to “peaceful” mode: the monsters do not appear at night, and your health points regenerate on their own. This is useful when starting out in Minecraft, for example. You can then switch back to “normal” mode Consider building a tall watchtower, at the top of a rocky outcrop or mountain, near your house. This will help you find your way back if you get lost. Put torches on your tower, or better: lava. The light will be visible from a distance.

To find your way back, you can also sow blocks at regular intervals, or even make a route.

When you put a block of cobblestone on the ground, did you notice the “L” in the pattern? When the L is displayed in the correct direction, you are facing North. The trick also works for Nether blocks

As a flood barrier in your mines, you can use bamboo or a door (even if it is open!): You can walk through them, but the water cannot. The door also stops the lava, even open.

Magic, the door stops the water, even open!

A substitute for windows can be made with simple torches (if you have trouble finding sand for making glass): make a one-piece opening on either side of the door and put a torch in it. This gives you a good view of what’s going on outside and prevents monsters from entering. As a bonus, you can hit them with your sword from inside your house 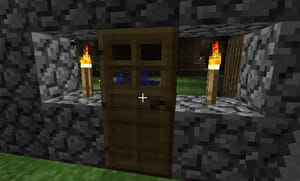 Make a basin of 2 side blocks and 1 deep block. Take two buckets, and go fill them at a lake or a spring, then pour them at opposite corners of the basin: here you are with an inexhaustible source of water. You can take as many buckets of water from it as you want. This trick does not work with lava (too bad!). 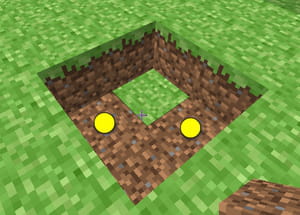 Saving and reloading your game will scare away monsters that didn’t burn in the middle of the day If you burn from the lava, throw yourself into a water source Monsters cannot open doors: Use it to secure the entrance to your house or mines. Also, think about it as an emergency exit if you are being chased: you can take cover.

If you have unfortunately looked an Enderman in the eye, there are two ways you can still get away with it: Keep staring him in the eye until it is daylight (it will burn), or move to to a body of water without taking your eyes off it (Endermen cannot stand water).

Quickly press and hold the advanced key twice to sprint. You will go very fast, but it will gradually consume your food.To avoid getting lost in your mines and caves, you can use signs or signaling systems with torches.
For example, two vertical torches to indicate “This way the exit”, with a third to indicate the direction.

Exit to the left: 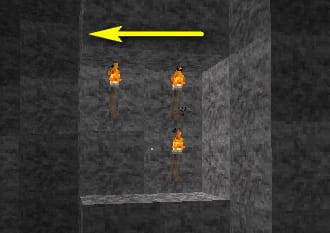 Exit to the right. 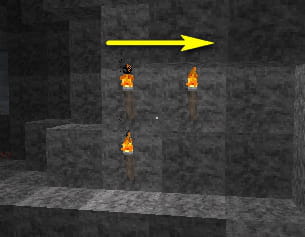 So even in a panic, you are able to run without thinking towards the exit.

You can also place a torch on the ground to indicate danger (such as a lava pit). 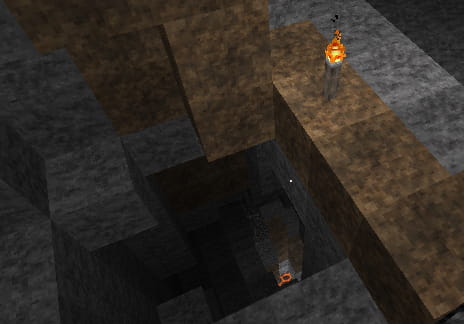 It’s up to you to invent other signaling systems.
You can also use these torches outdoors to indicate the direction of your home.

If you want to exit the Minecraft window without pausing the game, go into “crafting” mode before changing windows: Time will continue to flow in the game while you do other things. Convenient to let the Minecraftian night (10 minutes) pass by doing something else.

The existing game modes are:

The paid version can be played in the browser or downloaded to play full screen. The “Survival Single player” mode can also be played offline (without internet connection).

Minecraft does a lot of work on graphics cards. Some low-end graphics card drivers will crash a bit too easily (eg graphics cards and Intel driver onboard some laptops). In this case, reduce the render distance, and possibly avoid playing in full screen. On servers, avoid playing in “FAR” rendering distance. Always take “NORMAL” or “SHORT”, otherwise, you risk crashing the server.

If the performance is not good, reduce the render distance (FAR —> NORMAL —> SHORT —> TINY). It will greatly improve performance. If that’s not enough, play without maximizing the Minecraft window, or even minimizing it. You can also switch the graphics from FANCY mode to FAST (you will just lose the transparency of the foliage). If you are playing in full screen, it is better to press F11 than just enlarge the window: With F11, the display performance will be a little better.

Minecraft: Builders and Biomes”, you explore the Surface,

Minecraft Earth: what is the augmented reality construction game worth?

What Is The Fastest Ice In Minecraft?

How To Make Custom Entities In Minecraft Vanilla?